So, as I’ve been thinking a lot about honey bees (and no, we don’t have them yet–not stalling, I swear! Ok, maybe I am a little), so have I been thinking a lot about superorganisms. In a nutshell, a superorganism is a social group made up of individuals who would not survive for long outside of the group, work together and divide labor to further the goals of that group, and collectively exhibit a higher level of ability and/or intelligence than each individual alone. Honey bee colonies, ant colonies, and…colonies of…naked mole rats (Science journal’s 2013 Vertebrate of the Year, by the way), seem to be the go-to examples of superorganisms.

But here is what I think is weird: the human body and human society, evidently, are controversial examples. They definitely come up in the discussion, but I get the feeling that it’s the kind of thing scientists and sociologists have intellectual slap-fights over. So right away, I’m wondering what is so controversial. Why are these examples less accepted as meeting superorganism criteria than the others? (I mean why, other than the always impressive human ego, of course.)

One argument against including human societies is that humans can live in a large society or within smaller family units. But I have to take issue with that. Naked mole rat colonies (everyone’s favorite superorganism) can be made up of anywhere from 20 to hundreds. So different sized units are ok.

Let’s look at the main qualifications.

Show of hands– how many here would be able to survive completely isolated from all human society for more than a couple of years? How many would be able to do it without either some form of tool or supply made by humans other than yourself?

Pretty sure we have also figured out how to divide labor in order to assure the (biological, at least) success of the human species. I’m not saying it’s a fair division because it’s not, but hey, is it fair when all the drones get kicked out of the hive right before winter gets real? No, it most definitely sucks to be them. But the point is, everyone has some sort of role to play. And no, in case you’re wondering, I am not implying that poor people should be poor because it’s their station in life just like the drones or anything like that, so don’t even. As far as I know, there’s no requirement that the division of labor must be pre-destined. In fact, a female worker honey bee will have many different jobs in her lifetime including nursing young, cleaning, building, guarding the hive, and eventually she will graduate to scouting and foraging.

Then there’s that thing about the society, as a whole, being more capable and more intelligent than any individual. I know that this may not resonate with some people, having witnessed social calamities like the collapse of Wall Street, collective lapses in taste such as the pet rock fad, or the event that straddled the line between poor economic and poor cultural decision-making: the Great Beanie Baby Crash of ’99. 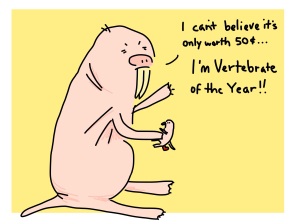 Without the support and collective knowledge of human society, even Einstein would have been living in a cave without the faintest idea that it’s Earth’s gravity holding his feet on the ground, or that light has to travel through space to reach his eyes. Since he’s still Einstein, he might be able to figure out how to bang big rocks together to make smaller rocks, or how to string leaves together to make a nice loincloth. But there would be no theory of relativity. No, siree. A person doesn’t just come up with this stuff.

How about the human body? I totally think that would have to qualify as a superorganism, too. Sounds strange at first, but what are the qualifications again?

1) Made up of individuals that would not survive for long outside of the group. Well, aside from Henrietta Lacks, whose cells were so valuable to society precisely because they’re the exception to the rule, most of us are made up of cells that will die when removed from the body. And we’re not just made of our “own” cells, either! We are walking, talking, twerking, rioting, Harlem Shaking, Jersey Shore watching ecosystems for a whole array of bacteria and fungi, to the point that there are far more bacterial cells living on and in the human body than there are human cells! And we are only just beginning to realize the impact that these co-habitants have on our bodies.

2) Division of labor to further the goals of the organism. This begins in utero, as cells divide and become red or white blood cells, bone cells, nerve cells, etc. They all have jobs to do–remember watching videos in health class of the white blood cells surrounding and destroying foreign bodies? Patrolling through the blood stream like they had minds of their own?

3) Exhibit a higher level of ability and/or intelligence than each individual alone. Ever heard of “cellular memory”? It’s a hypothesis that, at least when applied to human cells, is considered pseudoscience, but I find it fascinating. The theory is that single-celled critters have some capacity to store memory, absent of brains. Look up the Japanese slime mold study on the Google sometime–you won’t be sorry. Anyway, I bring this up because you probably don’t think of your cells as “individuals” so first I just want to throw it out there that you can look at your cells as just the building blocks of you–or you could look at them as individuals who are simply minuscule parts of a superorganism. At least just humor me and think of them that way for a sec, thanks. So you have all these little mini-organisms all doing their thing, but they are contributing to the goals of a higher consciousness, i.e. you.

I think this is all super interesting, but of course I am not a scientist. Or a sociologist. I have some friends who are. And, if they are reading this, they would probably like to engage in an intellectual slap-fight right now. How about you, out there? Is our society a superorganism? How about our bodies? If you are so inclined, feel free to weigh in with a comment.